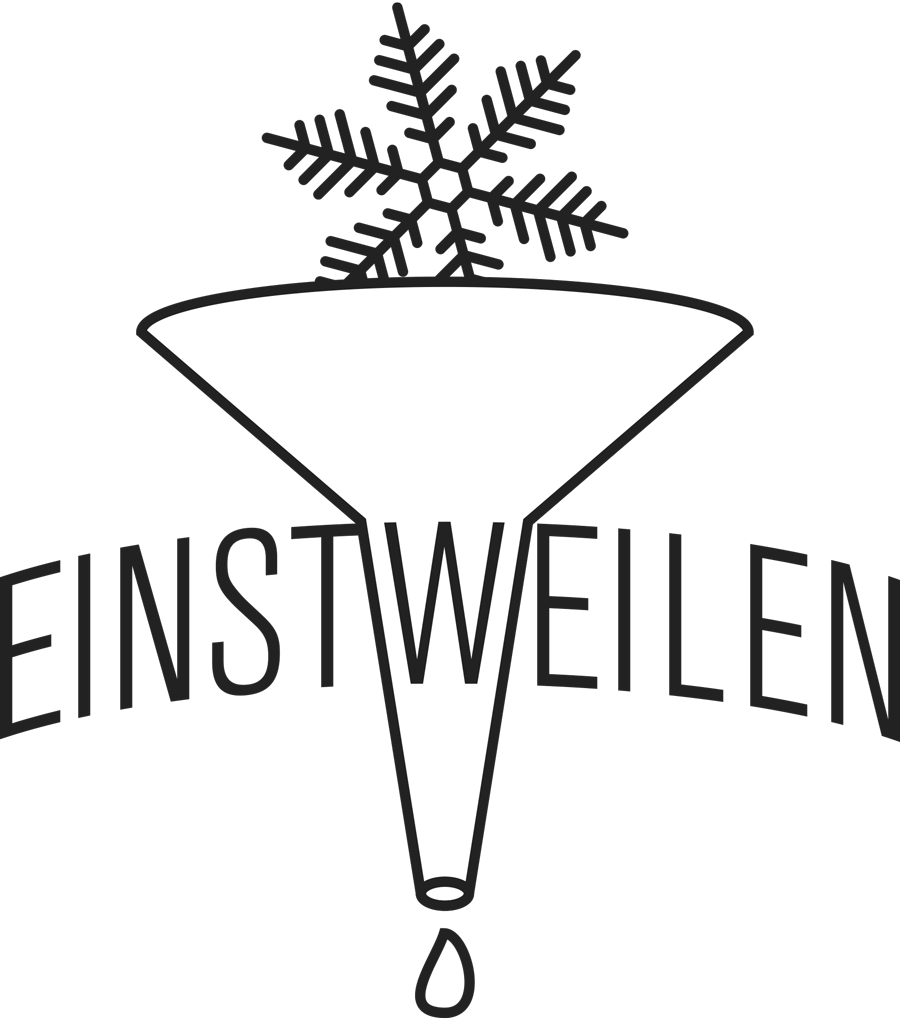 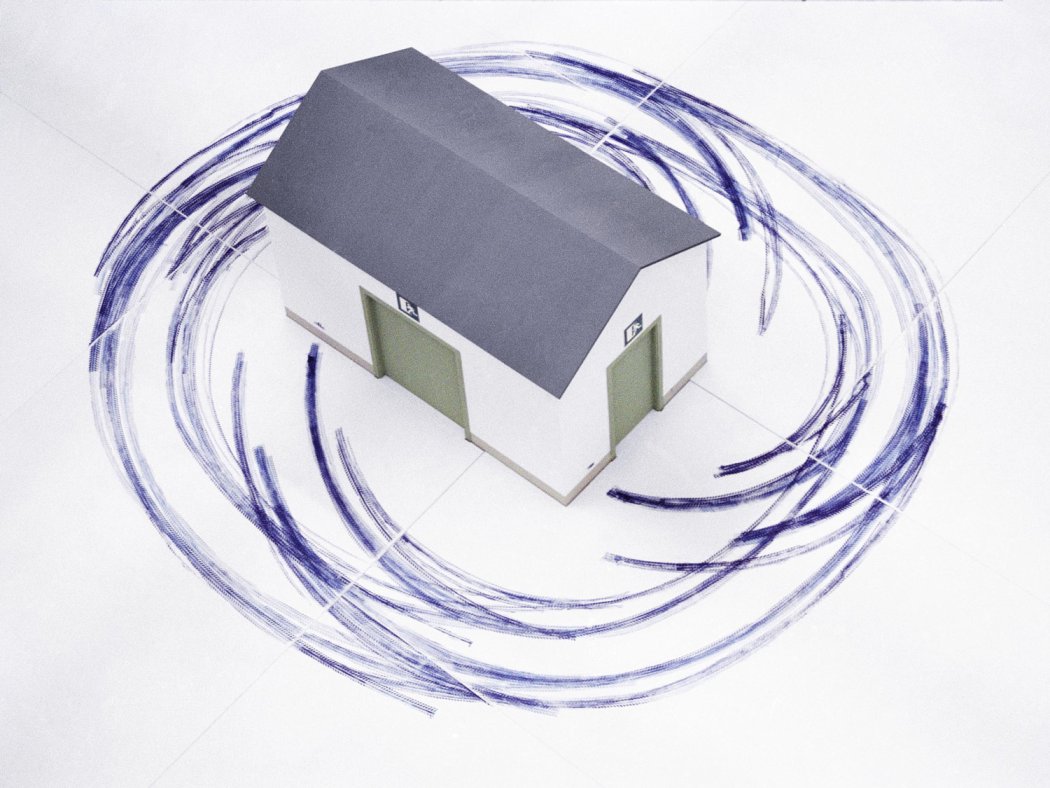 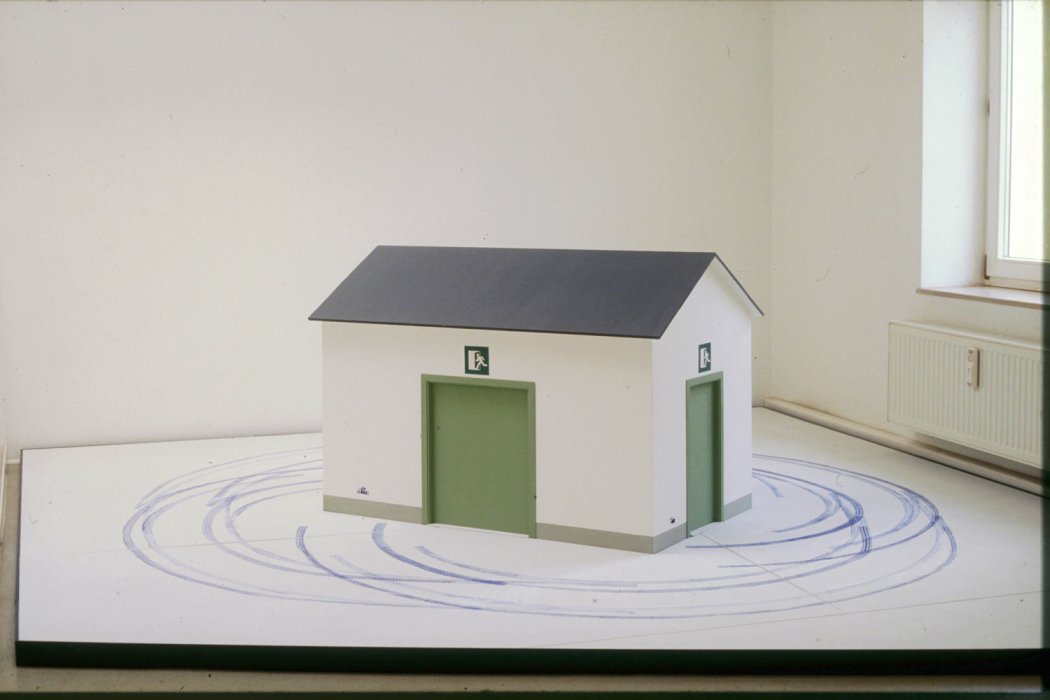 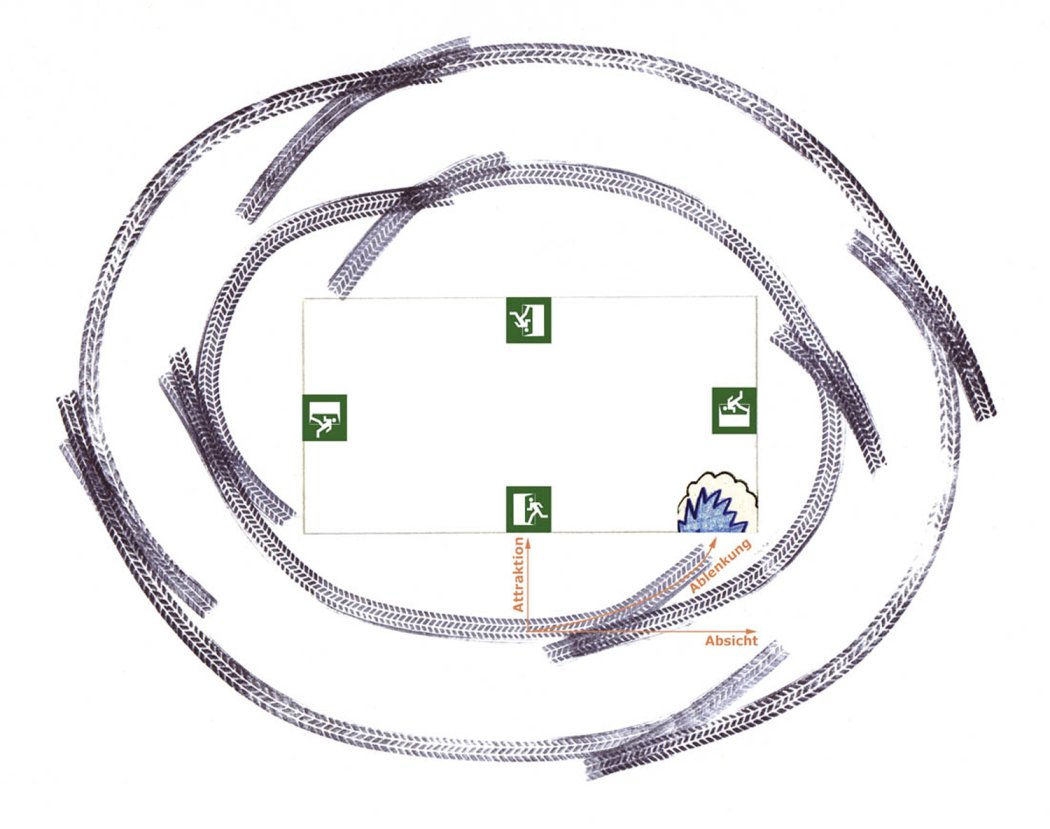 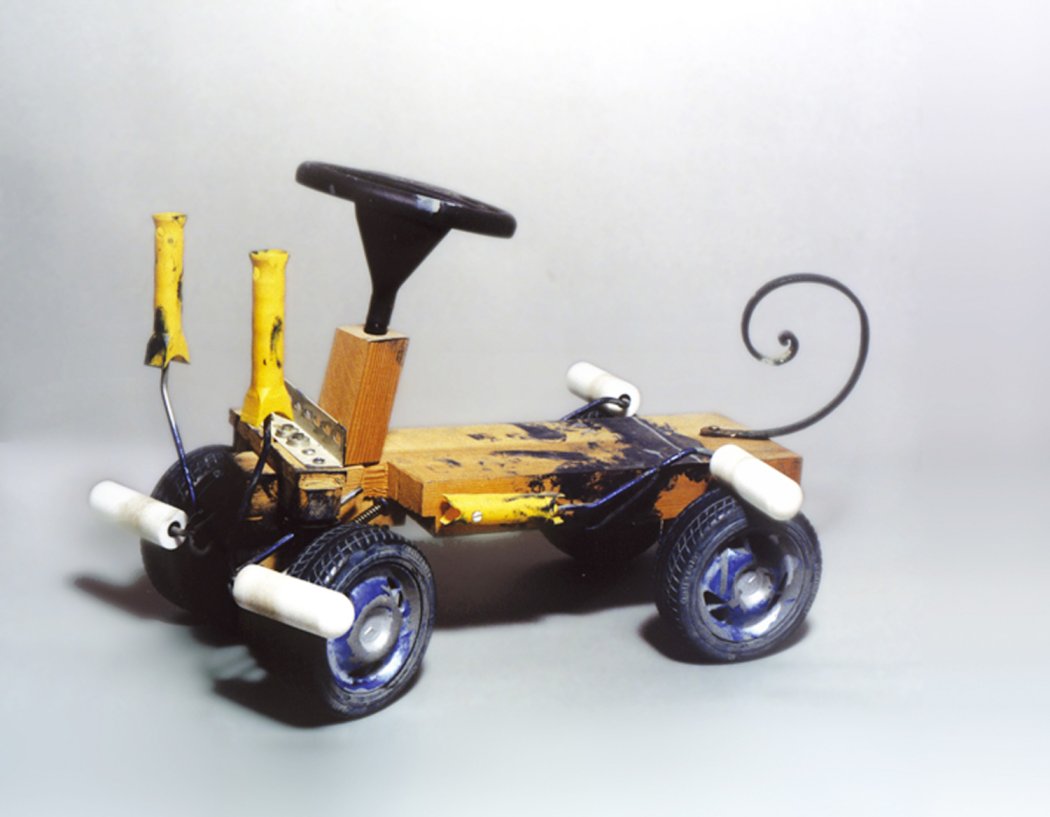 Despite recurrent failing on the middle path, new attempts to succeed are constantly made. Repeated efforts under shifting distributions of energy points to the centre ever more clearly.

Two mutually exclusive objectives moving in opposite directions, ‘intent’ and ‘attraction’, influence at every point in a paradigm of movement the latter’s outcome. The middle path that results – ‘distraction’ – leads to an interruption of the movement at a central obstacle. Despite recurrent failing on this middle path, however, momentum is maintained and a shifting distribution of energy points to the centre of failure ever more clearly. To the left and right of distraction, bottomless nooks and dark crannies of subconscious influences open up, propelling us to hunt for patterns and paradigms.
→ We are constantly influenced by things we don’t know anything about.

I
The model ‘Failing with passion’ assumes that every person suppresses a highly personal, unspoken and oft unnameable central attraction with great emotive potential, the gravitational force of which influences all intentions.
Attraction may be aroused by isolated emotions, traces of memory, undreamed reality and the like – remnants and results of development processes, forcing this central attraction to remain secret and not lived out in public. Under certain circumstances, it is suddenly activated, ensuring that it isn’t ignored. Since this operative centre is part of the subconscious, we often only become aware of it as a recurring series of reactions in which attraction suddenly catalyses the evident discharge of desires and a paradigm for disappointment. This act of failure generates an extreme personal pattern of contact.
In the model, access to dominant attraction is symbolised as an escape route. Strictly speaking, it’s about transgressing boundaries with no return. Revealing the secret or the confession entails a fundamental change of the human condition. Fear is therefore our constant companion if we orbit attraction with passion.

II
The model also assumes that intentions have a rational, self-determined origin and that a person intent on making a move follows them in such a manner as to conform to foreseeable public behaviour (consensus). Thus, the intention to make a move involves several preconditions that confirm assumptions both about the outside world and one’s self-image. This is complex: the confirmative link to external authority (by heeding consensus) enables a reassuring check of the protective limits surrounding one’s freedom of action – and this simultaneously means disassociating oneself from the (self-serving) belief not to give up these very limits. Such spruced-up intent wishes to bypass attraction unharmed and unnoticed, yet cannot help to secretly obey it.
Distraction is the outcome – that which is new in the paradigm of power. For the sum of a man’s actions (imprisoned in this model) neither conforms to his confessed intentions, nor can he give in to secret attractions. Taking the middle path, he fails.
Always closely linked to the powers of attraction and intent, yet related to these in varying ways, an enhanced form of failure increases the chance of finding an opening – a ‘pore in the skin of the soul’ – to unleash authenticity. The sums on the balance sheet of power, which are always weighted differently, create reference points for retrospective personal consistency.

III
From the perspective of attraction, intent resembles a fleeting disappointment. Intent regards attraction as an extreme exaggeration. Both have a problem with distraction. Distraction longs to arrive but is afraid of the impact – for which, above all, it must muster up its own strength if it does not want to get caught between attraction and intent. Exposed between these two forces and keen to avoid further conflict, distraction consumes itself.
The extent to which frequent failure changes its original conditions – in other words, that a reaction is triggered – is left open in this highly static model. Attraction and intent may well adapt to the constant dynamics that the opposing forces exert upon each other, while the resultant distraction may prove to be more important than the original intentions (serendipity effect).
In this project’s conceptual phase, following one of the vectors seemed to be a highly perilous fusion or synthesis. In the meantime, however, this direct approach actually seems less rewarding. We could even assume that both intent and attraction collaborate and only feign stability and irreconcilability.

IV
We can fundamentally visualise the paths of our life as personal patterns, a kind of guilloche humain with overlapping patterns of endangered periods of life. Experiences are clearly and distinctly marked by their very consequences. New meaning is created – it is no compromise but the pattern is an answer. 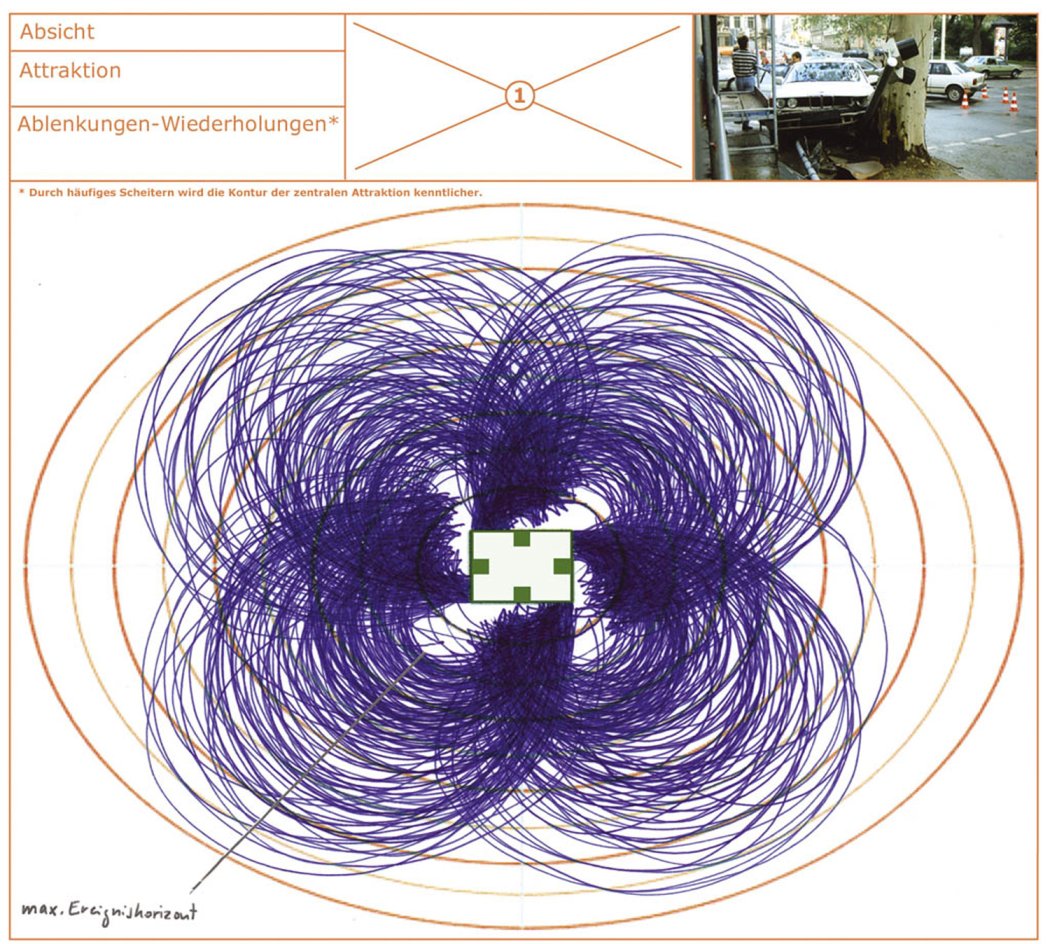 Form for defining aims and intentions 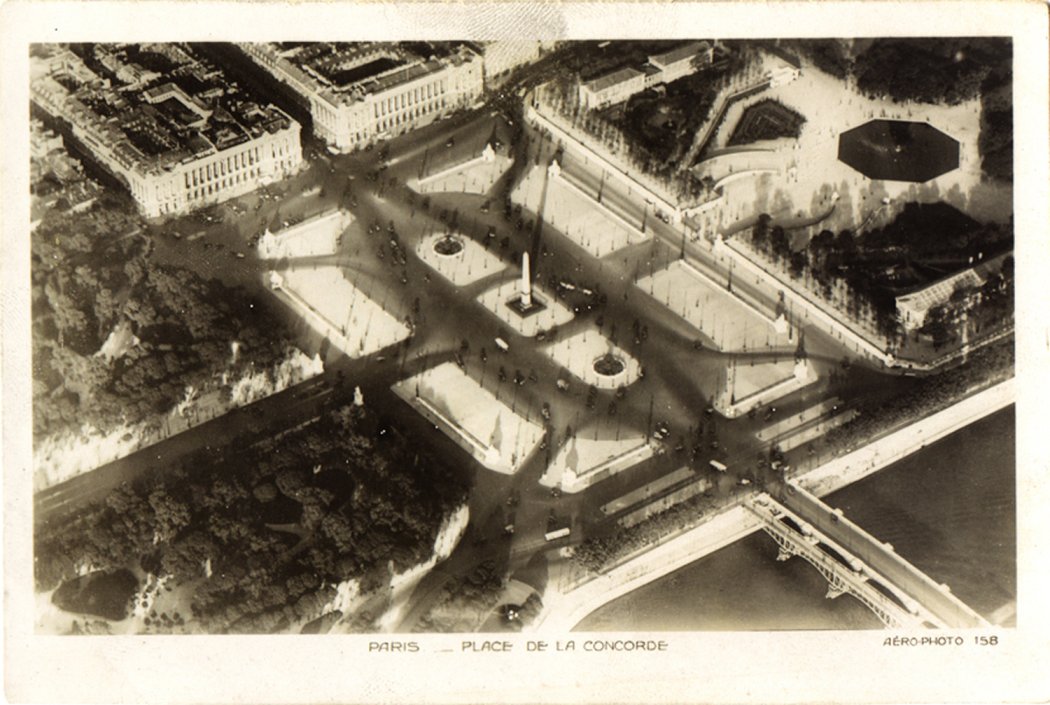 Festival of the white rose, July 1829, cavalcade on the occasion of the tsarina’s birthday 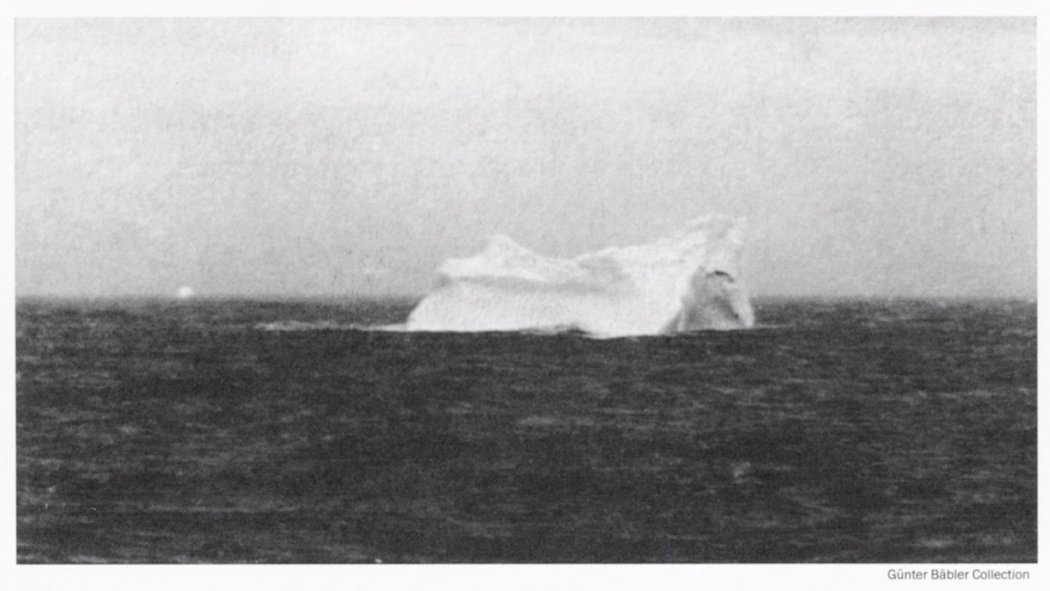 Iceberg in the North Atlantic, April 1912 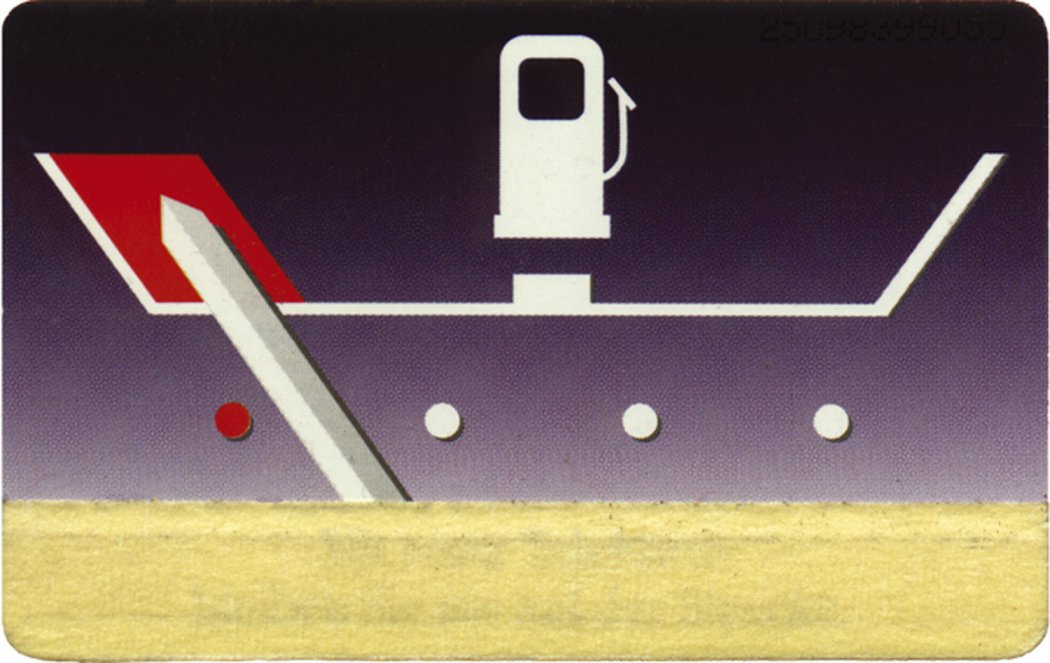 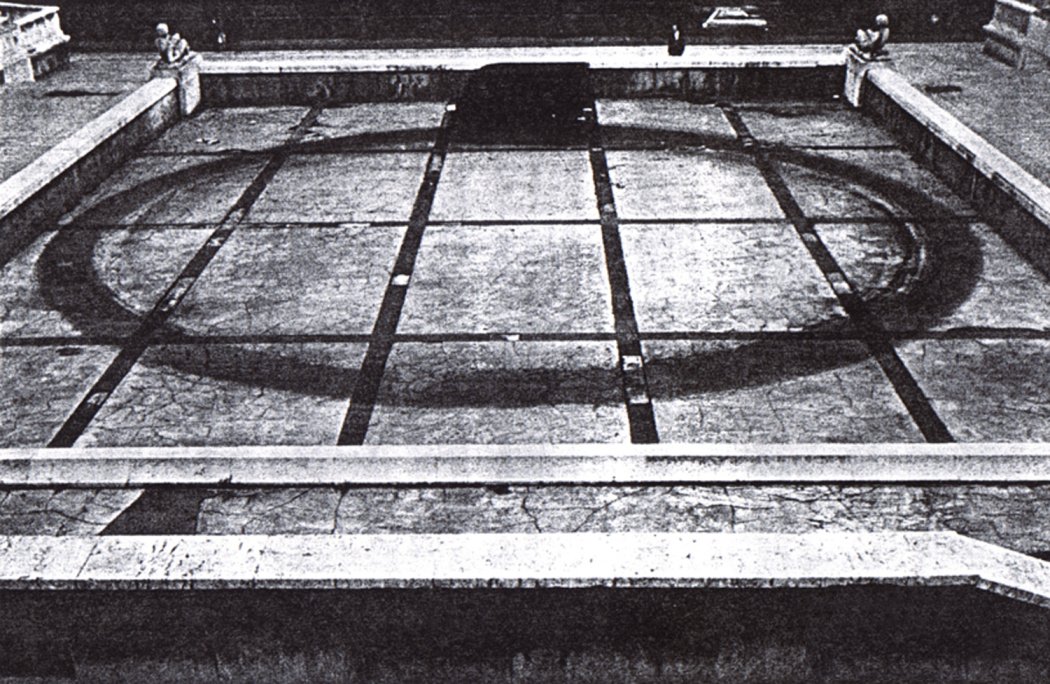 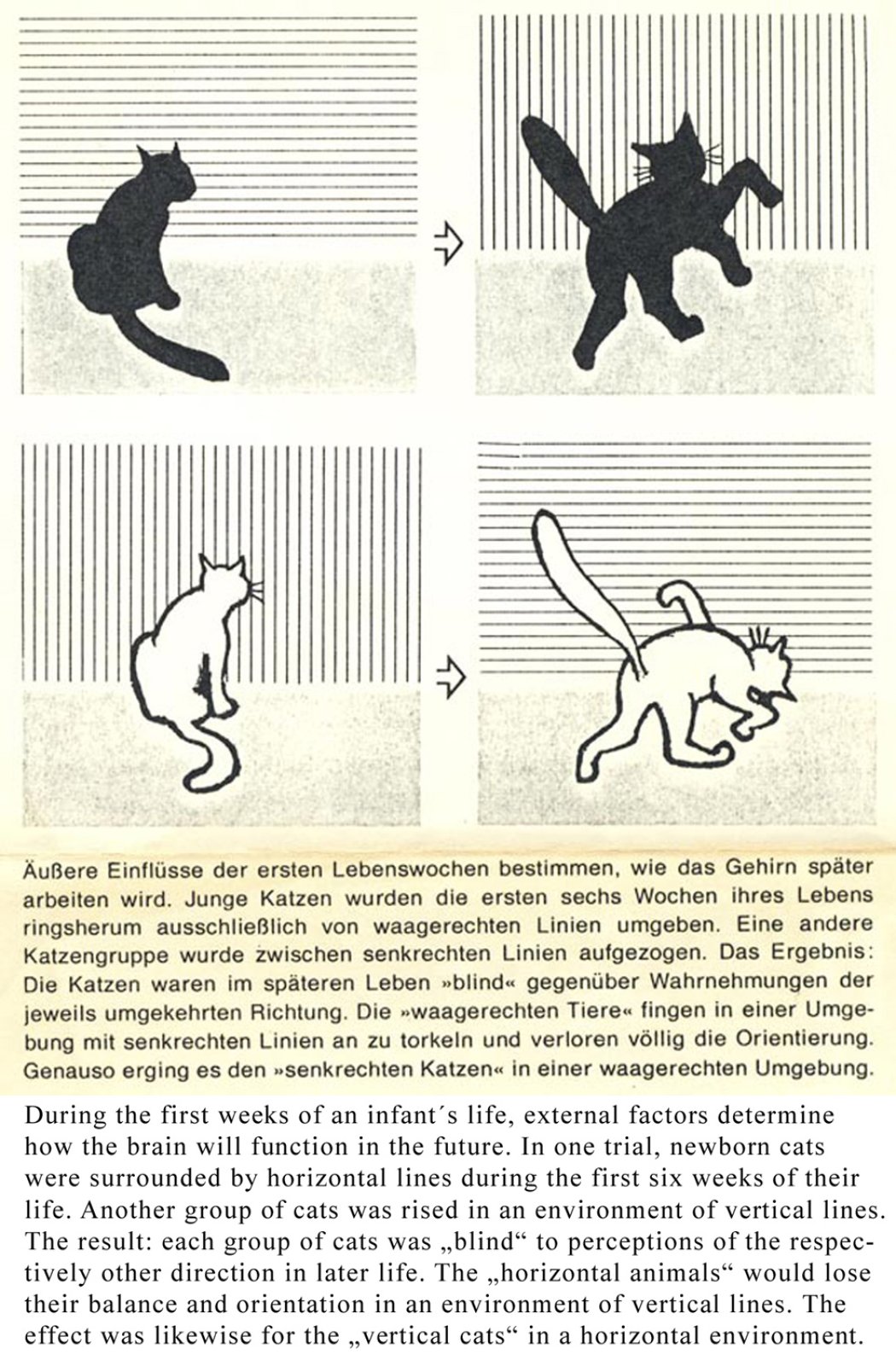 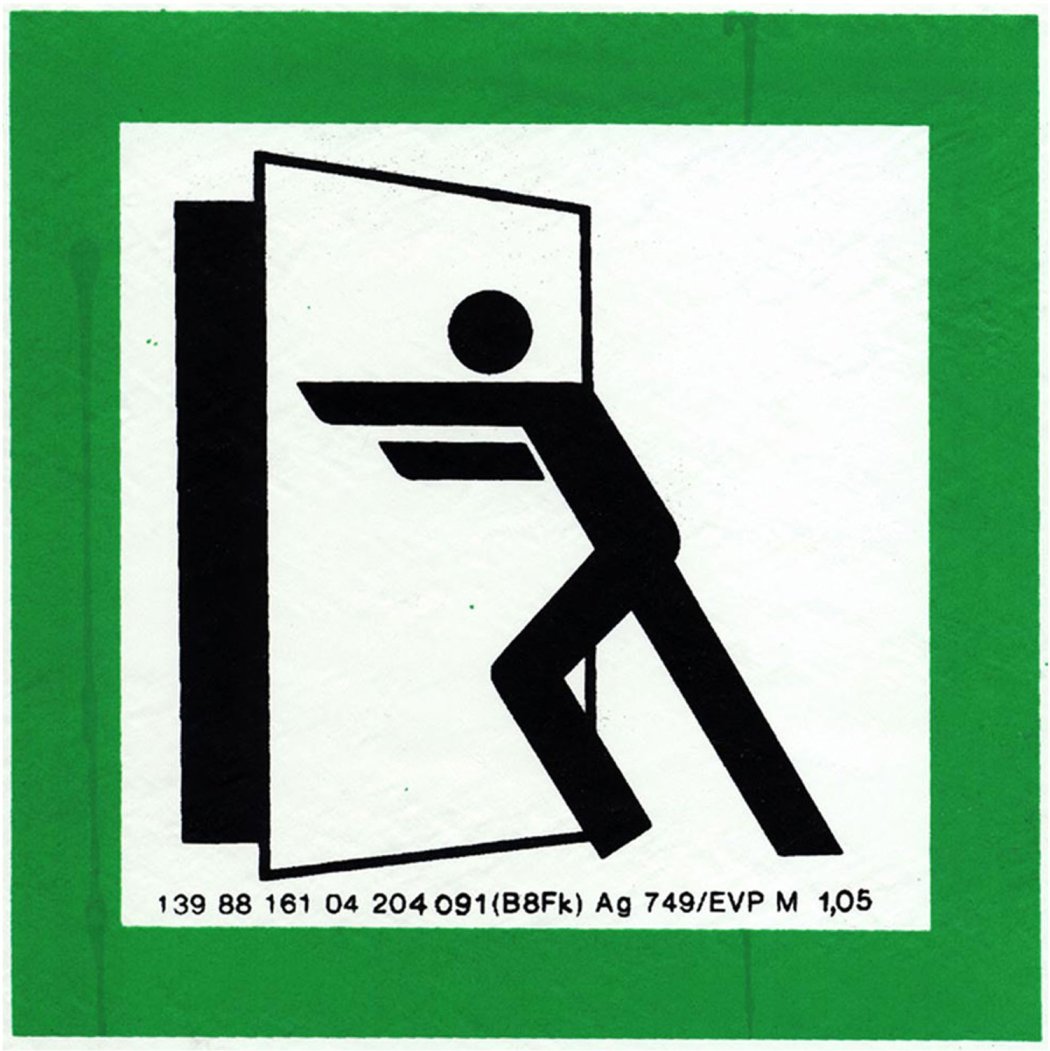 Emergency exit of the GDR
- In case of danger, close the door and stay there? 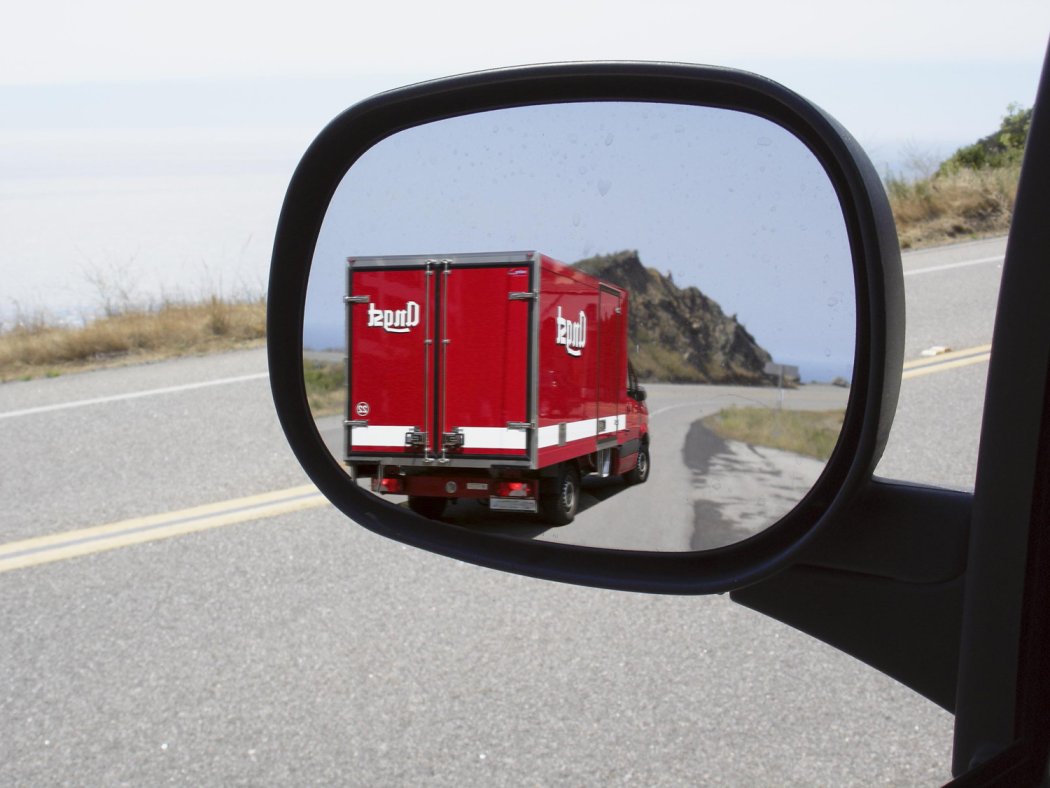 Fear in the rear-view mirror 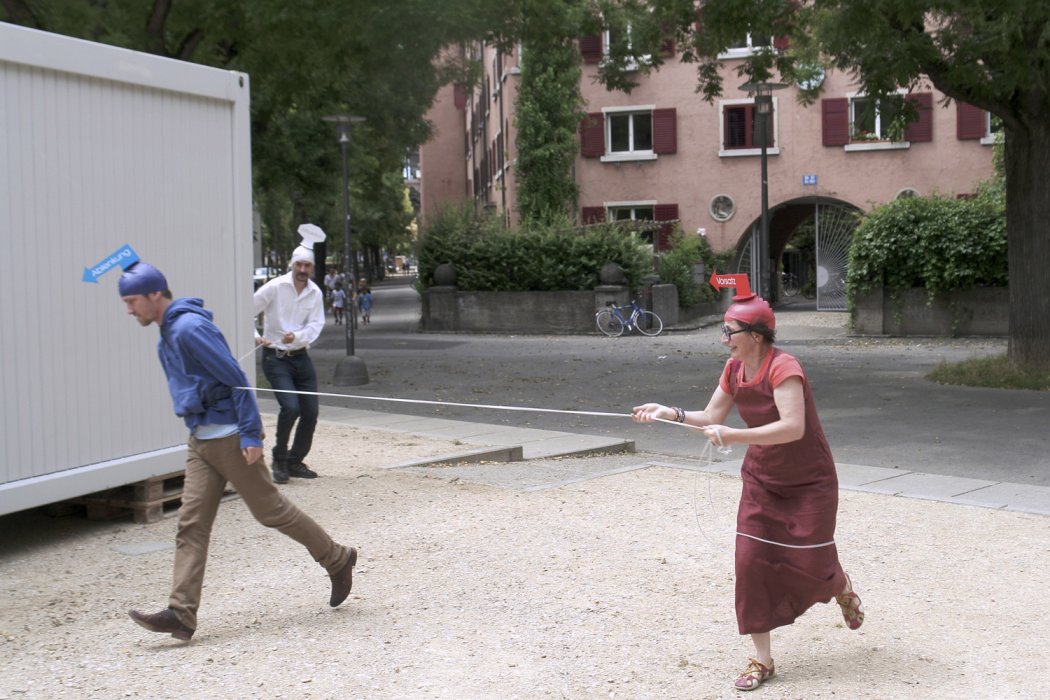 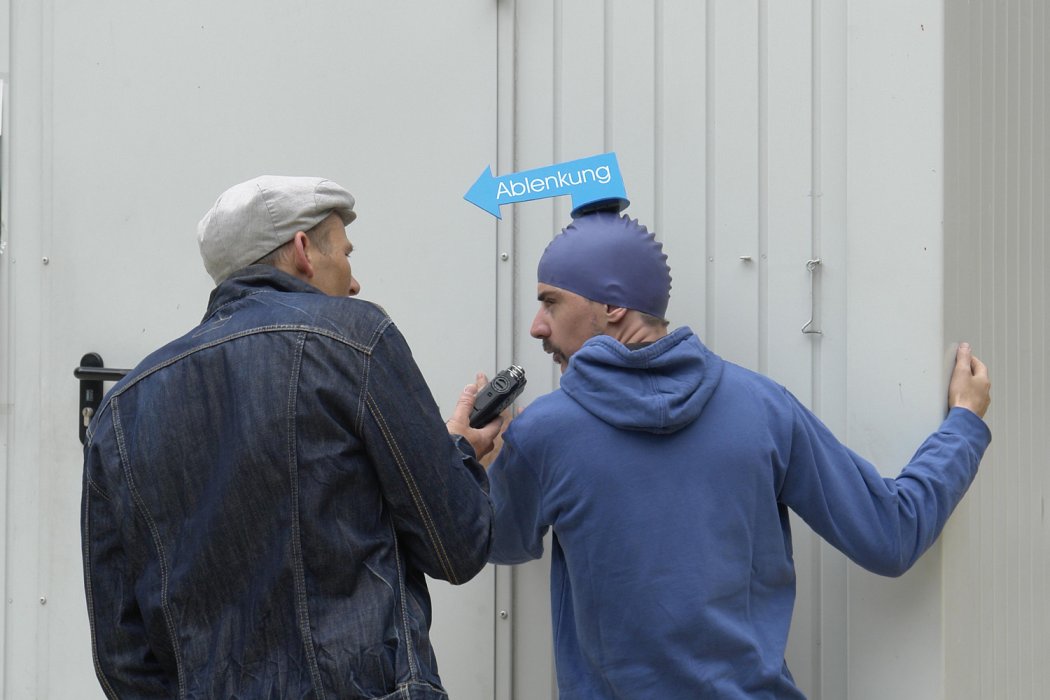 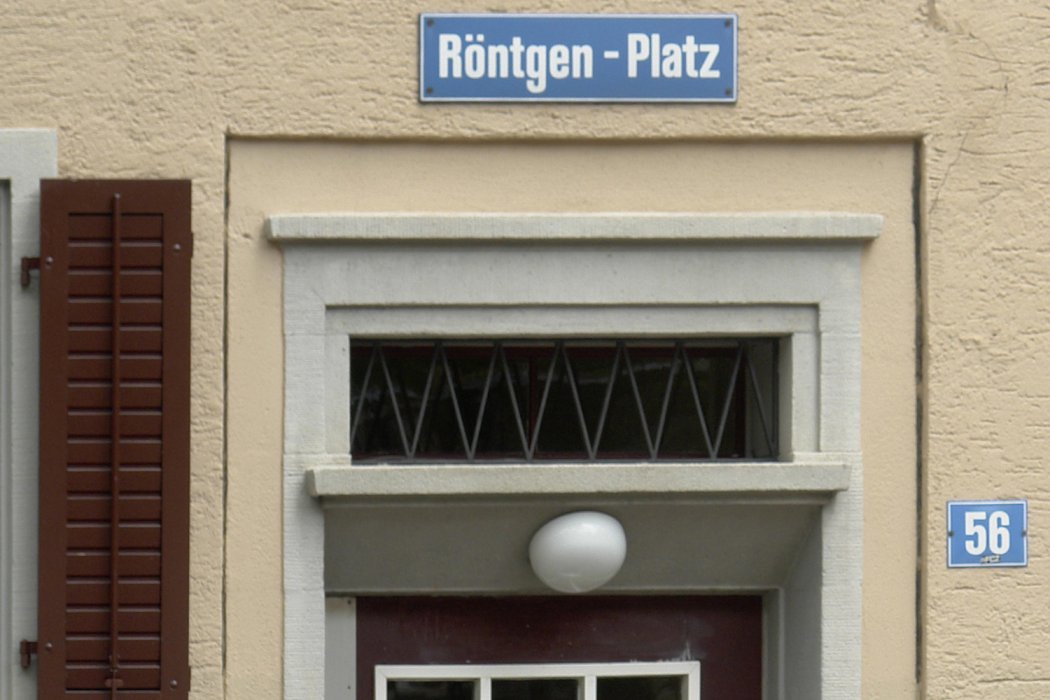 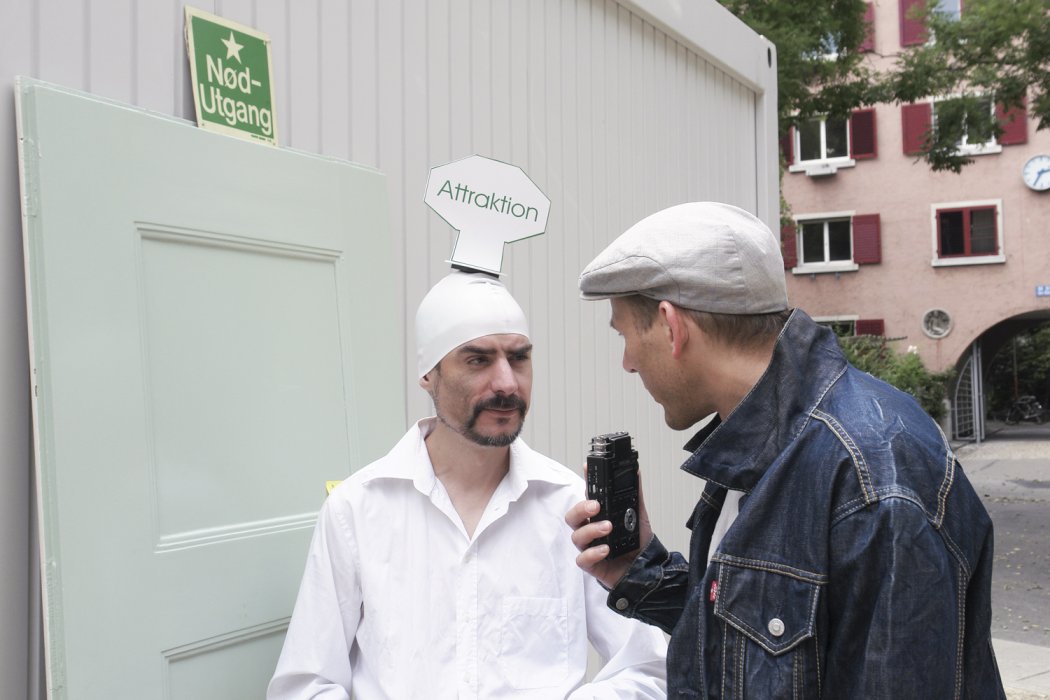 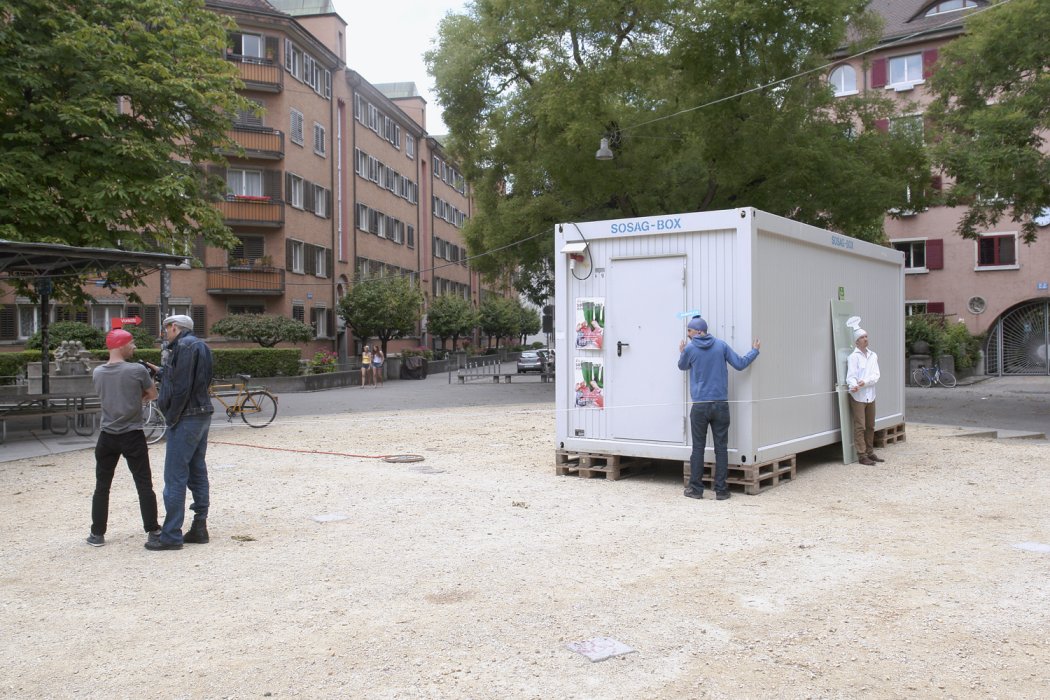 On 8 July 2012, the project Scheitern mit Lust (Failing joyfully) was put to the test as a lively constellation of tensions at Röntgenplatz in Zurich/Switzerland. Actors represented the forces Intent (I) and Attraction (A) as well as their result, Distraction (D).  This triangularity – essentially indicative of family dynamics – was held in relational check by elastic cords. Behind Attraction’s back, the door was propped to the room in Zurich that I lived in. Above this, my faithful Norwegian emergency exit sign. They were several rounds in which the actors changed their roles and functions. The following interviews were conducted by a psychologist  (+), and I compiled them afterwards.

+: How would you describe the dynamic, Intent?

I: In the beginning, you could say it was erratic. Then it gradually turned into a softly sloping upward curve, reaching its zenith, at which point I somehow tramped down this hole. The hole was filled with instability. I lost my balance a little.

+: How did you feel in this situation?

I: I felt stopped in my tracks.

I: Well, I suggested moving in a certain direction, but I felt stopped in that way.

I: I cannot say what force. But it leads me astray.

I: Bored, I guess? Well, I originally had the intention to engage in some sort of billy goat dynamic, and now I’m a little disappointed.

+: But do you realise what is happening to Attraction?

I: I don’t see Attraction; she’s completely out of my eye.

+: And how did Distraction feel?

I: God, if only I knew. I mean: she hit the wall nose first. How does Distraction feel? No idea.

A: It’s a relaxed position. I can deal with Distraction quite well; she’s got a keen eye. But what tends to escape me is Intent.

+: How do you feel with Distraction always trying to get past you?

A: It insults me, of course. I want Distraction to come to me. I sure am disappointed. Distraction doesn’t want to make eye contact. And yet, Distraction is also somewhat part of Attraction.

+: And how do you think Distraction feels?

A: Distraction is always occupied with something else. In the end, she is slightly troubled by the tension and collisions.

+: And other than that? A: Like a goatherd Peter?

+: How does a goatherd Peter feel?

A: Well, he’s longing for Heidi, and Heidi might be Intent.

+: And which role does Intent play in this for you?

+: And how does Intent feel? Do you think Intent is satisfied, Attraction?

A: Don’t know. I don’t see him much these days. If I was Intent, I think the situation would bring me out in a cold sweat.

+: Distraction, how do you feel in your situation?

D: Fine! I enjoy being distracted.

+: What distracts you? D: Both Intent and Attraction.

+: And who do you feel is stronger?

+: Intent is stronger than Attraction?

D: Yes, mostly, sure. And then there’s this stupid middle ground.

+: How did you experience this?

D: It was exciting, actually, because I had the whole pitch for myself.

+: Meaning that you could freely decide where you wanted to go?

D: Nah, I couldn’t decide for myself and rather let myself flow free.

+: Was that a pleasant feeling?

+: Distraction, how do you think Intent feels?

D: Intent feels strong. I can sense it. Intent is very dominant, because he represents a kind of original force.

D: She is too negligent.

+: Meaning Attraction is not strong enough? You can’t get to her.

D: Yeah, she’s a bit lazy perhaps. Attraction was virtually turned off. It’s like she wasn’t even there at all. Attraction doesn’t really exist.

D: She feels attractive. Yes, probably. I suppose so. That’s what it’s like with attractions.